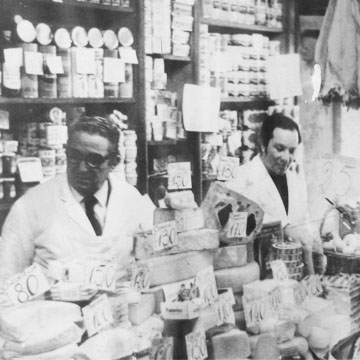 Fermi is a shop specializing in food products founded in the late nineteenth century.
Today the brand still stands for tradition has for traditional specialties of various kinds, but also of culinary innovation and that is why it has become, over the years, one of the most recognizable names in the gastronomic panorama.
It dates back to 1896, thanks to barcaro Vittorio Fermi, opening the first store in Treviso, fairground, where they concentrated on trade and the local economy thanks to the river of Sile. Up to half of the '900 constituted, in fact, one of the most important communication routes between the lagoon and the hinterland, between Venice and Treviso. With the management of his son Francesco in 1952 the business moved inside the walls of Treviso, in Fish market area and the new engine of the economy of the city. Together with his son Mirto, the store soon became one of the reference points for Treviso.
In 1979 Mirto, flanked by his wife Luisa, began the process of transformation of the raw material, ie the realization of ready meals mainly based on stockfish, the specialty of the store. In 1989 firm began to market its own line of products, based mainly on the production of preserves, sauces and pates made by Mrs. Luisa. Immediately products were highly appreciated and in years to come followed recipes and innovations.
In 2004 the shop, with the management of Claudio and Dario Fermi moved to its present location in Via San Parisio, while maintaining the tradition of parents, transformed what once was the shop, in a modern and refined boutique food and wine, now the destination of food shopping.
Inside the store, also, is a restaurant where you can sample the specialties such as the cod and cod prepared in various ways, bigoli in sauce and more.
Even today, as then, the selection of raw materials and processing thereof are performed with the utmost attention. Great passion and dedication to work have always been serving customers, which ensures quality and reliability of products.